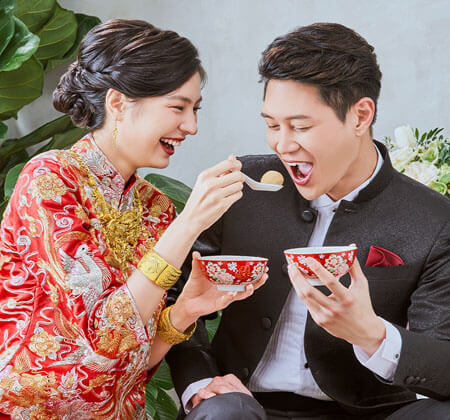 Wedding Traditions You Do Without Realising the True Meaning

Wedding rituals tie us to our cultures. For as long as Chinese couples have been tying the knot, these cultural rites and customs have been integral to marriage ceremonies. They uphold tradition over the years and present an opportunity to celebrate origins, ancestors and faith.

Wedding Traditions: Then vs Now

However, as time has passed, wedding customs and traditions of the past do not necessarily fit in the picture for the contemporary couple. Much goes into consideration when it comes to planning a wedding, and some couples may find there are too many traditions to observe.

But, that doesn’t mean you have to do away with all of them. While some customs are no longer the norm and have fallen out of favour, there are several must-have traditions that have evolved over time so you can still incorporate them with a modern twist and carry them into the next generation.

Originated in China, this popular tradition stems from the bride’s family’s reluctance or unwillingness to give the bride away. Thus, this presents a test on the groom’s sincerity and commitment to win her hand in marriage through a series of gate-crashing games. Some believed that the noises created throughout the duration could scare off any evil spirits lurking around the wedding. Another belief is to help prepare the bride and groom, and both sides of the family, to get acquainted for the first time through ice-breaking, since it is common to have arranged marriages in the past.

In present times, modern couples went through courtship before deciding to get married, but the gate-crashing tradition remained as one of the joyous parts of the actual wedding day. It is also an opportunity for the bridesmaids and groomsmen to have fun – the bridesmaids will prepare various tasks and challenges for the groom and groomsmen to participate in. Nowadays, the ideas for gate-crashing games are endless and creative. Among the activities may include dancing and singing, sentimental professions and quizzes, and food-related games that they must perform in order to successfully fetch the bride from her family home.

Another significant part of the wedding, the tea ceremony is a formality to offer tea respectfully to both families as a show of gratitude towards their parents for all their support and love over the years. Once the groom has fetched his bride from her family home, they head to his parent’s house to serve his elders tea. Afterwards, the same will be done for the bride’s elders when they return to her place. The tea ceremony also symbolises the couple being accepted and welcomed in each other’s families. Traditional sweet teas are used and brewed with ingredients like red dates, longans and lotus seeds as a symbol of fertility and the harmonious relationship between the newlyweds and their respective families.

Today, the tea ceremony is held in one place without having to travel back and forth between houses. The function rooms in hotels and country clubs are commonly chosen – for the purpose of ease and convenience by having the same venue where the solemnisation ceremony and banquet is also organised. The couple will serve tea to their parents, then followed by their relatives in the order of seniority: grandparents, grand uncles and aunts, uncles and aunts, and then elder siblings. Paternal relatives are also served first before their maternal ones.

A wedding ring isn’t the only thing that the groom should come bearing. In the past, the Chinese betrothal ceremony, known as Guo Da Li (过大礼), symbolises the groom’s sincerity and desire to marry the bride. On a chosen auspicious date, he will present the bride’s family with a set of betrothal gifts that carries a deep symbolical representation of good luck and prosperity. The selected gifts are given in pairs and correspond accordingly to their dialect group.

Nowadays, this occasion marks the formal meeting between both families. Betrothal gifts are brought by the groom’s family to the bride’s family home between 2 to 4 weeks before the wedding. The items typically include a betrothal basket, traditional wedding cakes, red packet for the betrothal gift money or pin jin (聘金), 2 bottles of hard liquor or wine, pig trotters or whole roast pig, and 2 pairs of Phoenix and Dragon wedding candles.

As part of the betrothal gifting during the Guo Da Li ceremony, jewellery is also presented to the bride by her mother-in-law, which symbolises the bride’s welcome as a new family member of the household. Known as Si Dian Jin (四点金), this traditional custom is translated as “4 touches of gold”, which gained inspiration from the four-pointed curved roofs of houses in Teochew provinces. The gifting came to symbolise that the bride will always have a roof over her head, giving her assurance that she will have a comfortable life with her husband and her new family. She is expected to wear it on the wedding day to display her appreciation and let others admire it. The bigger and the chunkier Si Dian Jin is, the greater it depicts the wealth status of the groom’s family, which assures the bride will be well taken care of.

In comparison to today, the practice of gifting this 4-piece jewellery set has become a common tradition across all Chinese dialects to serve as blessings for the newlyweds’ marriage and future. It is the norm for the bride’s parents to request for it, but even without it, it is expected of the mother-in-law to be highly gracious in providing such a gift. Some will also involve the bride in the decision on when and where to buy Si Dian Jin, and choose the designs she prefers.

Made from the purest gold 99.9%, every piece of SK Jewellery Si Dian Jin is beautifully crafted with meaningful stories. It has evolved to become a modern heirloom with intricate designs that interpret its traditional symbolism and signify an auspicious conjugal union. Popular gold jewellery designs for weddings include the legendary Dragon and Phoenix, and Shuang Xi to convey blessings for the newlyweds. With contemporary options available today, modern Si Dian Jin 四点金 transcends passing fad and trend while staying true to the significance of the custom.

SK Jewellery aims to revitalise the importance of Si Dian Jin as a blessing and heirloom that holds a significant story to last through your wedding day as well as other important milestones in your life. Beyond just accessory wear, it is also more than merely a customary Si Dian Jin because it holds a meaningful story that you can pass down from generation to generation. Visit SK Jewellery’s e-store or come down to any of our showrooms to explore our Si Dian Jin collection.

Check out Wedding Traditions You Do Without Realising the True Meaning

No products in the cart.
Savings:
RM0
Total:
RM0

DO YOU WANT TO SAVE YOUR CURRENT DESIGN?

discard save
Cancel
Add to cart

You have to select pendant.

WhatsApp Chat is free, download and try it now here!